For the Global Big Day I checked my two patches - Nir Oz and Besor Reservoir. Started off in the wee hours with Scops Owl, Barn Owl and Stone Curlew calling followed by the dawn chorus of Blackbirds, Olivaceous Warblers, Sunbirds and various members of the pigeon family. At first light Syrian Woodpeckers started drumming and a young Great Spotted Cuckoo began pestering its Hooded Crow 'parents' for food. I met up with Aviv and Neta and we drove to Besor Reservoir  picking up Black-winged Kite on the way. 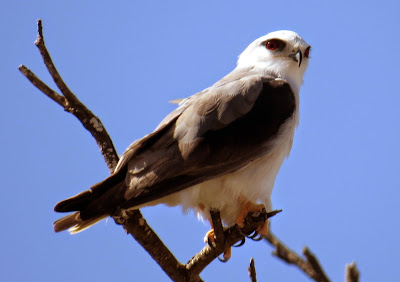 The Besor Reservoir was fairly productive but with some notable exceptions from yesterday (no swifts, Rufous Bush Robin, Feruginous Duck, Garganey, Black-winged Stilt, Redstart or Lesser Whitethroat!!!) but also a notable patch tick (Little Bittern). Cetti's, Clamarous Reed, Reed and Sedge Warblers were in abundance, as were Little and Cattle Egrets along with Squacco and Night Herons. Purple Heron numbers dropped to two. 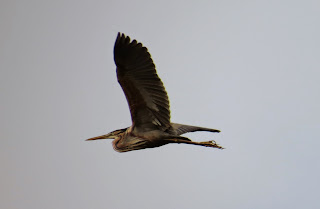 The Little Owl was on its favourite bank 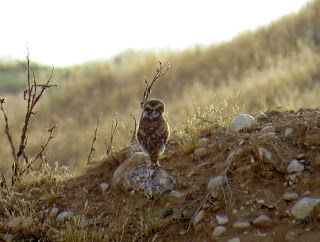 and the Rollers were doing their usual best to keep out of (decent) view - always flying or against the light. 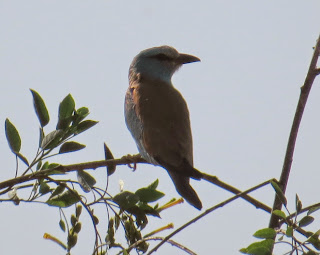 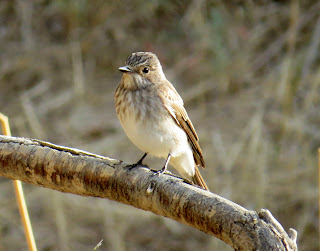 a couple of Masked Shrikes, Blackcaps and Willow Warblers increased the passerine list. Swallows and Sand Martins were the only hirundines. Bird of the day came in the form of aLittle Bittern that flew a short distance over the reeds before dropping out of sight. Very pleased to have seen that here. A couple of Honey Buzzards, a Long-legged Buzzard, Buzzards, 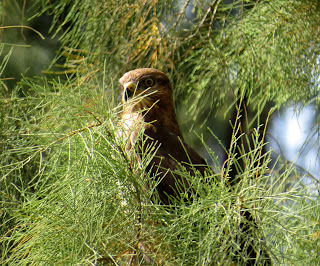 Marsh Harrier, Sparrowhawk and Kestrel completed a rather disappointing raptor list. A Purple Swamp-hen made a typically brief appearance before disappearing back into the reeds. As we headed back to the car a flock of a couple of hundred Pelicans took off from the not-worth-checking upper reservoir. 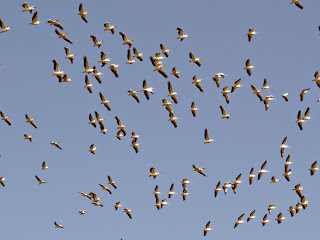 A final stop at Reim Reservior yielded Little Stint and Common Sandpiper and the Pelican flock from Besor bringing the total to 60 species seen by ~09.30. As mentioned above, there are some glaring and strange omissions in the species list (how is possible not to see Lesser Whitethroat?) but Little Bittern and Black-winged Kite made up for it.