An excellent finish to 2011. Three juv Eastern Imperial Eagles sat together in one of the northern fields before flying off. Two went north but one flew towards me allowing fantastic views. The adult was also present in its usual spot on the western edge of the Nir Oz fields. 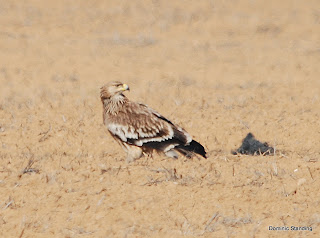 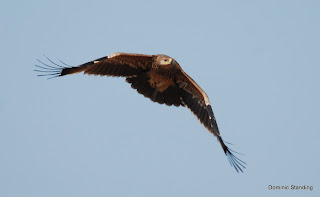 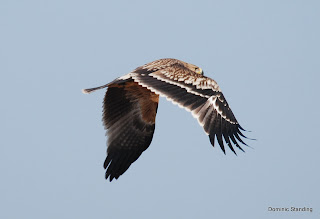 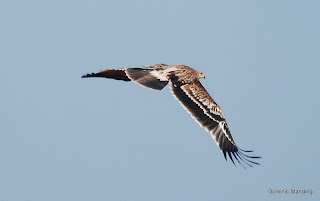 All in all, it's been an excellent few months birding here. Highlights for me were Steppe Grey Shrike (1), Sociable Plover (4 max.), Oriental Skylark (1), Richard's Pipit (1) and of course, the winter raptors (Eastern Imperial Eagle, Spotted Eagle, Lanner Falcon, Peregrine, Merlin, Common Buzzard, Long-legged Buzzard, Sparrowhawk, Pallid Harrier, Hen Harrier, Marsh Harrier). The winter fields have filled up with Lapwings, larks, pipits and Corn Buntings. Golden Plover passed through earlier (up to 49 in a single flock). A single Eleonora's Falcon and a small group of Levant Sparrowhawks seen from our porch were definitely the year's best garden birds.

The autumn passerine migration was a joy to see. Waves of Willow Warblers gave way to wintering Chiffchaffs. Black Redstarts replaced Redstarts. Bluethroats are numerous. Stonechats ditto. Two groups of Golden Orioles moved through. A single Savi's Warbler and a single Great Reed Warbler were highlights around the sewage pond. Also, a single Zitting Cisticola in the northern fields was a pleasant surprise.

Lesser Grey, Masked and Red-backed Shrikes were all common in season. No records of Woodchat Shrike yet.

Stone Curlew numbers in the stock yard rose to 85 before they dispersed.

My brother came over for a week in October and we managed some superb birding around here and in the Arava. Hooded Wheatear, Sooty Falcon, Little Bittern, Crowned Sandgrouse were new for me. We found a very smart Grey Phalarope at Khehemin - a rarity here.

There's always 'one that got away' and my one was a possible Nightingale ssp. hafizi. It appeared briefly and then went to cover, frustrating several attempts on my part to relocate it. Oh well.