A brief trip but what we didn't get in terms of quantity we got in quality, including some southern Israeli specialities that had previously eluded us.


Introduction
We visited Israel in April 2009 and April 2010 when we had seen over 200 species but this was our first autumn trip together.  I had also moved to Israel just two months previously so we were taking a hybrid view of Israel’s birds, part visitor and part resident.  In the event the distinction proved meaningless as our current Israel lists aren’t so very different, although that will no doubt change as the months go by!
The range of species was very different from early April, with Red-backed Shrikes, Masked Shrikes, Spotted Flycatchers, Willow Warblers and Redstarts in abundance, but no Nightingales, Tree Pipits or Ortolans and almost no raptors or sylvia warblers!
Bird of the trip in Israeli terms was a Grey Phalarope at Kehemin sewage, not rare in the UK and Ireland but definitely rare in Israel.  Both of us added Crowned Sandgrouse and Hooded Wheatear to our life lists and we enjoyed great views of a family of Sooty Falcons, a number of rails and crakes and a further seven species of wheatear.
Summary of Itinerary
Car Hire and Accommodation
Eldan (eldan.co.il/en) provided a small five-door Daihatsu (in Eldan’s car class D) for a daily rate of approximately US$18. This was a good choice for two people in terms of fuel economy and comfort.  It was also automatic and very roomy – one of us is 6’6”!
Accommodation in Eilat was in the SPNI Field School. This time, instead of camping, we choose an air-conditioned room. It was a fairly basic en-suite but clean, quiet and comfortable. Recommended.
Detailed Itinerary
Sunday 9 October
After Rod’s overnight flight from Tel Aviv, we checked out the local patch around the kibbutz, enjoying views of the many Hoopoes and Syrian woodpeckers and the nearby sewage pond.
The sewage pond and its surroundings look quite promising and it will be interesting to see what turns up there.  We unearthed the first of many Red-backed Shrikes, Masked shrikes and a few warblers. 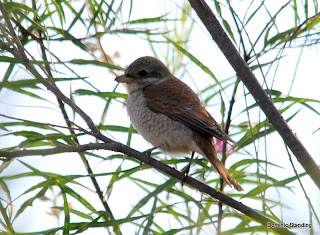 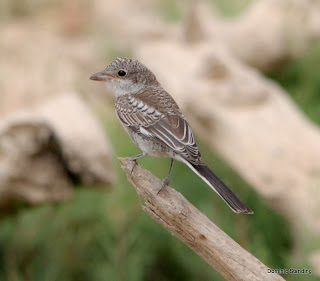 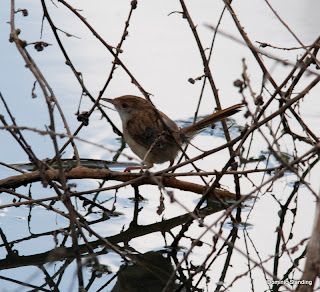 Graceful prinia
It was very hot and overhead a small number of Lesser-spotted Eagles were heading southwest above the teeming Black Kites.  We assumed at the time that this was a harbinger of further raptor movements to come but it turned out to the last as well as the first!
Monday 10 October
We made an early start and headed for Ze’elim sewage ponds and Wadi Besor, about 20km away.  The sewage ponds held only a couple of Egyptian Geese amongst the common waders and ducks.  A juvenile Egyptian Vulture was an easy spot perched on a tree as the sun rose over the wadi, a long river of green reeds and rushes that winds through the desert for about 10 km ending at Park Eshkol.
We followed the lush greenery while listening to Cetti’s Warblers and White-breasted Kingfishers and keeping an eye out for open water amongst the reeds.  At the second such pool we spotted a Purple Swamphen clambering around on the stems before it flew off with its bubble-gum red legs trailing. A little further on a dam across the wadi created a shallow pool that covered the width of the valley-bottom.  After a short stake-out a Bluethroat, two Spotted Crakes, one Little Crake and a Water Rail emerged from the vegetation to give fabulous views. 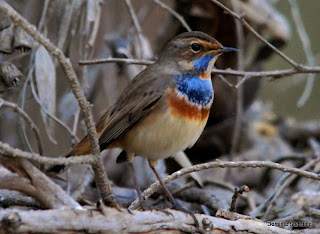 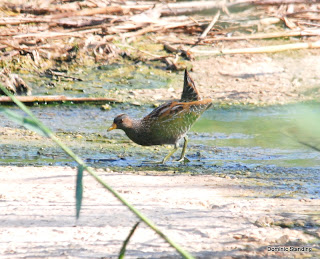 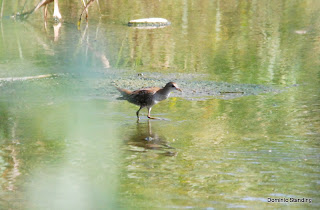 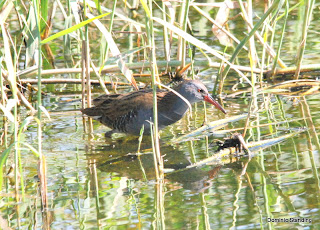 Water rail
It was now getting seriously hot and by the time we got back to Nir Oz it was over 42 degrees so birding took a back seat for the rest of the day.
Tuesday 11 October
An even earlier start found us at the Nizzana plain in the dawn light.  The scene was rather quiet compared to April, with no birds singing or harriers quartering the plain, but a McQueen’s Bustard soon put in an appearance flying across the road with its owl-like wing beats.  While we were checking out the Southern Grey Shrikes, a Bar-tailed Lark called but did not give itself up. 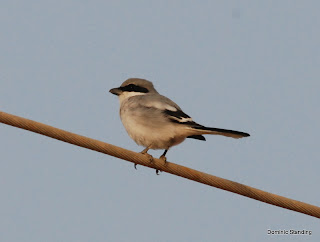 Southern grey shrike
We moved on to the Kehemin sewage ponds which were, in contrast, teaming with ducks, waders and other birdlife.  We spotted a Hobby, 5 Whiskered Terns, a Temminck’s Stint and our only Moustached, Great Reed and Olivaceous Warblers of the trip. 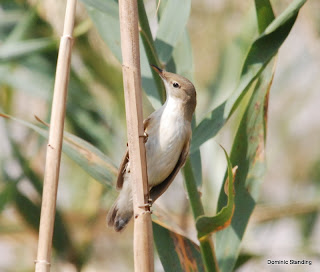 Olivaceous warbler
These were pretty standard Israeli birds but the smart Grey Phalarope we found was certainly not and we took some time to get views and photos of the dark-yellow bill-base to be absolutely sure! 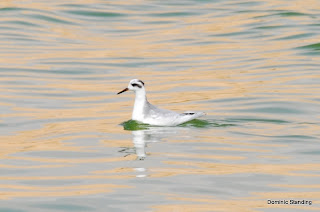 Grey phalarope
While we were watching these birds a small number of Spotted and Black-bellied Sandgrouse teased us by calling and flying distantly but they didn’t come in to drink.  We resolved to come back earlier the following day.
Late that afternoon we tried the Ze’elim rubbish dump for raptors but saw only hundreds of Black Kites.  It does look as though it should be a good site in the winter though.
Wednesday 12 October
Back to Kehemin sewage at dawn, where we were quickly rewarded with superb views of several groups of Crowned Sandgrouse flying in to drink, totalling 43 birds.  At least 50 Black-bellied and 100 Spotted Sandgrouse also came in giving great views. 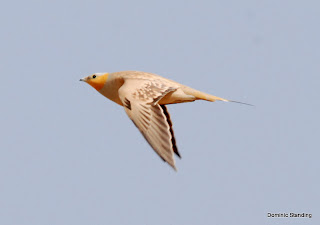 Spotted sandgrouse
We then headed south via Yeroham where we discovered that the reservoir has been drained.  This became something of a theme throughout the trip, whereby sites which had previously held water were found to be dry.  Fortunately the Yeroham park authorities have created a small recreational lake as a replacement and our spirits lifted when we found two Little Bitterns, a Night Heron and two Wrynecks around its margins.
Next stop was the Officers’ School sewage pool just before Mitzpe Ramon.  This held a Glossy Ibis but the nearby woodland, which had been nurtured over the years by the no-longer leaking overflow pipe, has become seriously degraded and over-run by goats.  Picking up our only White-crowned Black Wheatear of the trip on the outskirts of Mitzpe Ramon, we then tried the town’s sewage plant but this has now been tidied up and fenced in and offered little apart from a few Red-throated Pipits and lots of Barn Swallows.
The sun was getting low as we continued south and it became clear that we would arrive at Eilat in darkness so we enjoyed the last few minutes of daylight at K77 on Route 90, picking up our first Blackstart but very little else apart from the inevitable Red-backed Shrike.
Thursday 13 October
We decided to cover as much of the southern Arava as we could and started at Eilat North Beach at dawn.  A few White-eyed Gulls loafed around offshore but not much else so we headed north starting with the date palms.  These contained little apart from the customary flock of Indian Silverbills. 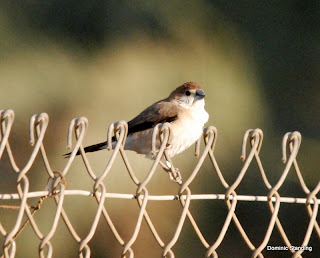 Indian silverbill
Next was the Bird Park which contained only Caspian and White-winged Black Terns.  The K19 reservoir held the usual water birds including a Spoonbill and 5 Garganey but the ditch leading up to the K20 salt pans was dry and bird-less and the K20 salt pans were relatively quiet.
Heading further north, the Elifaz dung heap had an Isabelline Wheatear and the nearby sewage pond a Squacco Heron.  Qetura sewage was quiet but we saw our first Little Green Bee-eaters of the trip. 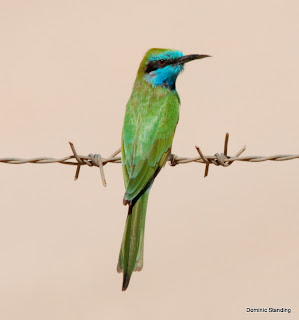 Little green bee-eater
The kibbutz at Lotan was also very quiet so we tried a bit of raptor watching from the heights overlooking the Arava next to Route 40 where it climbs up to Neot Smadar.  In the course of nearly an hour this yielded one Pallid Harrier and one Marsh Harrier hurtling south at enormous height on a mixture of powerful thermals and the northerly wind.  It was obvious why we weren’t seeing any raptor movement whatsoever from the valley below!
Next we went to Yotvata sewage plant where we found a new lake next to the plant.  It contained no birds of particular interest but it made a pleasant change to find a new water body rather than a succession of drained ones.
The day ended at the Yotvata circular fields where we found a Lesser Grey Shrike perched on recently harvested alfalfa bales in the northern field.  It was refreshing also to see large numbers of passerines in the stubble, including Red-throated Pipits, Tawny Pipits, Short-toed Larks, Whinchats, wagtails and wheatears.  The sun was setting so we couldn’t work the stubble as we would have liked and would clearly have to return. 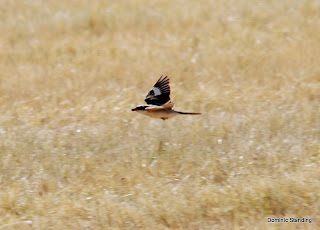 Lesser grey shrike
Friday 14 October
A bizarre day!  We started by heading into the Eilat Mountains before dawn to try a stake-out of the Ein Netafim spring, in the faint hope of seeing Hooded Wheatear.  Unfortunately we were turned back by the IDF and after a beautiful but birdless walk towards Mount Shlomo we went straight to the Yotvata circular fields.  Here we found a superb Hoopoe Lark followed by, guess what, a fine male Hooded Wheatear.  Clearly their distribution changes somewhat in autumn! Also present nearby was a mourning wheatear providing a lovely comparison of bill size and weight and amount of black on breast.
After a fruitless search for a Pied Wheatear that had been reported the previous day we turned our attention to the alfalfa stubble we had seen the previous day.  The Desert Wheatears were aggressively defending territories, at least until the Lesser Grey Shrike came along and chased them for minutes at a time.  We also could see a number of Richard’s Pipits in flight but couldn’t connect with them on the ground.
We wanted to finish the day at the K19 reservoir so headed south via the still-quiet K20 salt pans.  As the sun sank lower we waited on the reservoir bank and enjoyed great views of a male Barbary Falcon on the border fence.  A Purple Heron also flew in as at least 6 Night Herons emerged from the waterside vegetation to begin their nocturnal vigil.  Finally, several small groups of Lichtenstein’s Sandgrouse, totalling 11 birds, flew in and gave us rather dark but still satisfying views.
Saturday 15 October
Our long drive back north started with yet another visit to the Yotvata circular fields.  We quickly nailed some great scope views of at least one Richard’s Pipit in the stubble.  The other decent bird was an Oriental Skylark seen and heard in flight, which then vanished when it settled never to be seen again.  We also spotted the only Spanish Sparrow of the trip – a distant male perched at the edge of the field.
Continuing north we dropped in at Hazeva only to find that the reservoir was still dry and the kibbutz largely bird-free.  Next to Wadi Tamar, where we watched two adult and two juvenile Sooty Falcons in the canyon as it climbs up from the Dead Sea plain.  Then to Neve Zohar, where the reservoir was also dry (surprise, surprise) but a few Desert Larks entertained us.
Finally, as the sun set, we dropped off at Mount Amsa.  The Finsch’s Wheatears were already in their winter quarters accompanied by Spectacled Warbler and Little Owl.
Sunday 16 October
A final walk round the Nir Oz sewage ponds turned up our only Sardinian Warblers, a fitting ending to a great trip.